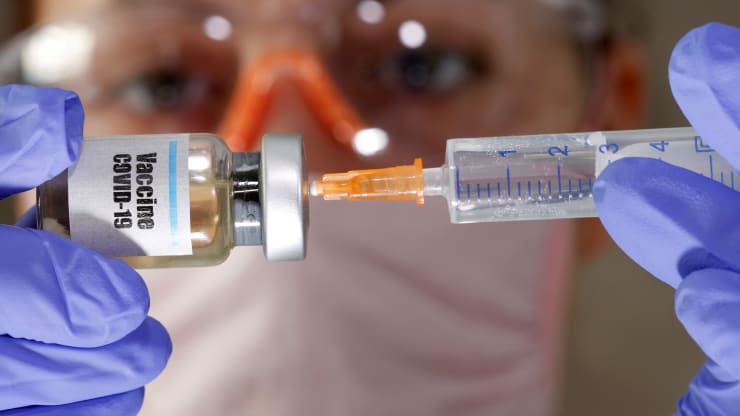 ‘Vaccine nationalism’ could lead to the coronavirus devastating public health and the economy, experts warn

“Vaccine nationalism” is turning the search for a Covid-19 cure into an arms race, which will ultimately damage the economy and public health, experts have warned.

Analysts at Eurasia Group speculated that tension over a vaccine would heat up over the summer, predicting a battle for access that will stretch into 2021 or 2022.

“Countries rich and poor will engage in aggressive procurement efforts with significant political, economic and public health implications,” they said in a note earlier this year. “Existing international institutions and agreements will struggle to minimize this ‘vaccine nationalism.’”

The research group argued that some governments were already attempting to seize first access through large-scale investments.

“In the U.S., the Biomedical Advanced Research Development Authority (BARDA) has been spreading its investments across a number of vaccine candidates in an effort to reduce the financial risks for pharmaceutical firms and lock in priority access to a successful vaccine,” the note’s authors said.

BARDA has financial interests in Moderna’s candidate vaccine and has invested in early research being conducted by French firm Sanofi and Britain’s GlaxoSmithKline.

In May, the U.S. also invested $1 billion in AstraZeneca’s potential vaccine, which is being developed by scientists at the University of Oxford. The British-Swedish pharmaceutical giant is aiming to produce 2 billion doses of the vaccine, with a view to roll 400 million doses out to the U.S. and U.K. by October.

AstraZeneca’s vaccine has also received multimillion dollar investments from the U.K. government and a $843 million payment from some EU countries, who have secured access to the vaccine should it prove to be effective.

Meanwhile, the Canadian government’s National Research Council has signed a deal with China’s CanSino Biologics to manufacture its vaccine for clinical trials in Canada this summer — giving Canada “an inside track on access,” according to Eurasia’s analysts.

Ian Goldin, professor of Globalisation and Development at the University of Oxford and ex-vice president of the World Bank, also warned there would be consequences if countries attempted to make the distribution of a vaccine a national enterprise.

“Some competition is healthy. You don’t want to put all your vaccine development eggs into one basket because it might not work,” he said. “But it shouldn’t be that the country with the deepest pockets is able to protect its citizens but in poor countries people die.”

Goldin said failing to inoculate the global population against Covid-19 would have long-term economic implications.

Speaking to CNBC’s “Street Signs Europe” last week, Tara Raveendran, head of life sciences research at Shore Capital, said some researchers — such as those at BioNTech and Moderna — were developing mRNA vaccine technology, which could allow production to be scaled up easily.

However, she added that this might not be enough to offset certain countries’ early-access agendas.

“This idea that countries that can afford to, will move first to secure a resource that’s scarce and needs to be shared equally definitely raises issues,” she said. “Non-profits have put frameworks in place to try and ease this burden, but it’s something we as an industry need to address head on.”

Raveendran noted that while the stockpiling of Covid-19 vaccines would make developing them a commercially viable endeavour, it could come at a cost to public health.

“If we resolve the situation in developed markets and there’s still virus running rampant in other parts of the world, this is a problem for all of us,” she told CNBC. “We need to be very aware of how we distribute a very limited resource at the beginning.”

Goldin added that if the virus mutated in parts of the world that were unable to access the vaccine, Covid-19 would once again pose a threat to global public health, even for those who were immunized.

“We don’t know how long these vaccines will last and how effective they’ll be,” he said. “So it’s not a solution either on equity grounds or on self-interest grounds.”

‘A long way’ from vaccine discovery

Distribution and supply challenges are “much more solvable” than actually finding a vaccine that works, according to John Rountree, managing partner at Novasecta, who told CNBC “we’re a long way” from having an effective vaccine.

Likening the vaccine development landscape to the space race of the 20th century, Rountree warned that vast government investments would not miraculously pave the way to an effective vaccine.

“Politicians can put aggressive timelines in, and it lends itself to putting a man on the moon,” he said. “In the end, you’re dealing with biology, which is a much more difficult problem than the engineering challenge of sending a man to the moon. And biology doesn’t follow timelines.”

President Donald Trump has voiced ambitions for a vaccine to be developed and distributed by the end of this year, in a project dubbed “Operation Warp Speed.” However, medical experts — including Dr. Anthony Fauci, the U.S. government’s top infectious disease expert — have cast doubt on Trump’s goal.

There are currently at least 160 potential Covid-19 vaccines being tested around the world, according to the WHO.

Ebooks have not been around for a very long time but millions of people use them and read them. There are many benefits to having ebooks over printed books and they have slowly captured the hearts of many. If you are someone who loves ebooks and has been looking for a great ebooks library online that hosts books from quality authors, then you need to check out what TOP has to offer.