Latest Blogs
Home EDUCATION How does your brain take out the trash? 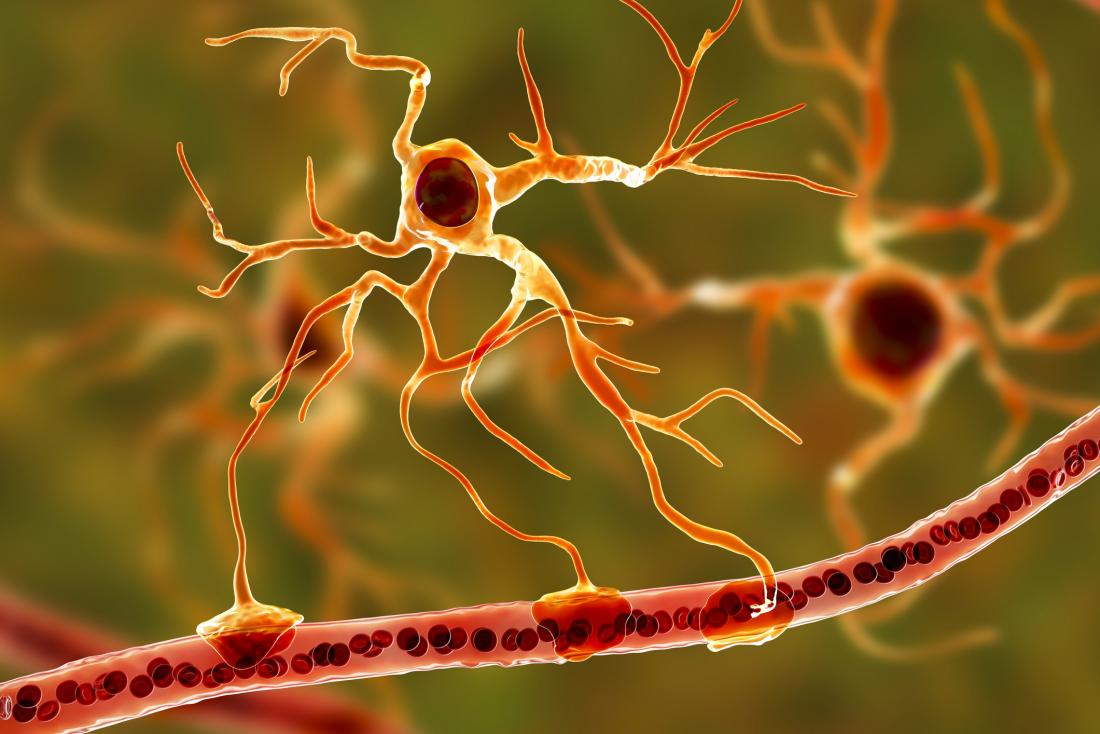 How does your brain take out the trash?

Astroglia (illustrated above) play a pivotal role in the brain’s trash collection service.

Many of us are relatively familiar with the lymphatic system; it performs a number of roles, one of which is clearing metabolic waste from the gaps between cells, referred to as the interstitial space.

However, the central nervous system (CNS), which comprises the brain and spinal cord, does not have any true lymphatic vessels.

Because the CNS is highly active, metabolic waste can build up quickly.

The CNS is also very sensitive to fluctuations in its environment, so the body needs to remove cellular garbage somehow, and that’s where the glymphatic system comes in.

Before the discovery of this brain-based garbage disposal system, scientists believed that each individual cell handled its own metabolic detritus.

If the cellular system became overloaded or slowed down as we aged, metabolic garbage would build up between the cells. This garbage includes products such as beta-amyloid — the protein associated with Alzheimer’s disease.

The term “glymphatic” was coined by Maiken Nedergaard, a Danish neuroscientist who discovered the system. The name is a reference to the glial cells, which are vital to this waste clearance system.

Glial cells get relatively little coverage, compared with neurons, despite being just as numerous in the brain. They were long considered little more than lowly support cells, but are now held in higher regard.

Glia protect, nourish, and insulate neurons. They also play a role in the immune system and, as we now know, the glymphatic system.

In particular, a type of glial cell known as astroglia are important. Receptors, called aquaporin-4 channels, on these cells allow cerebrospinal fluid (CSF) to move into the CNS, setting up a current that shunts fluid through the system.

CSF is a clear fluid that surrounds the CNS, providing it with mechanical and immunological protection, among other things.

As the blood vessels expand rhythmically, they drive the exchange of compounds between the interstitial space and the CSF.

The importance of sleep

Following Nedergaard’s discovery, she ran a series of experiments on mice to develop a better understanding of how this system worked and when it was most active. In particular, the team focused on sleep and Alzheimer’s.

Nedergaard and her team found that the glymphatic system was most busy as the animals slept. They showed that the volume of interstitial space increased by 60% while the mice were sleeping.

This volume increase also boosted the exchange of CSF and interstitial fluid, speeding up the removal of amyloid. They concluded that:

“The restorative function of sleep may be a consequence of the enhanced removal of potentially neurotoxic waste products that accumulate in the awake [CNS].”

This early work inspired a wave of new studies, the most recent of which was published this month. The researchers looked at the impact of high blood pressure on the function of the glymphatic system.

Using a mouse model of hypertension, the scientists demonstrated that high blood pressure-induced artery stiffening did interfere with the way that the garbage disposal system worked; it prevented it from efficiently getting rid of large molecules in the brain, such as beta-amyloid.

This finding might help explain why scientists have found links between elevated blood pressure and cognitive decline and dementia.

Parkinson’s disease is another condition characterized by the buildup of protein in the brain. In this case, the protein is alpha-synuclein.

This has led some researchers to wonder whether the glymphatic system might be implicated here, too.

In Parkinson’s disease, there is disruption in the dopamine pathways of the brain. These pathways play an important role in sleep-wake cycles and circadian rhythms; therefore, people with Parkinson’s often experience sleep disturbances.

A review published in Neuroscience & Biobehavioral Reviews proposes that the disrupted sleep patterns could hinder the glymphatic removal of debris, including alpha-synuclein, helping it build up in the brain.

Chronic traumatic encephalopathy results from repeated blows to the head; it used to be called “punch-drunk” syndrome because it occurs in boxers.

Some researchers believe that disruptions to the glymphatic system caused by brain trauma may increase the risk of developing chronic traumatic encephalopathy.

The authors of the review write that, following a traumatic brain injury, “Difficulties with sleep onset and maintenance are among the most commonly reported symptoms.”

As we have seen, this interferes with the glymphatic clearance of proteins from the interstitial space during sleep.

At the same time, these types of injury can cause the relocation of aquaporin-4 channels — those important receptors on astroglia that are vital for glymphatic clearance — into a position that hinders the removal of junk proteins from the interstitial space.

Beyond a possible role in neurological conditions, some researchers have investigated how disturbances in the glymphatic system may be involved in the cognitive symptoms of diabetes.

Scientists have shown that diabetes can impact a range of cognitive functions, both early in the disease’s progression and further down the line.

Some researchers are asking whether the glymphatic system might be involved here, too. A study carried out in mice used MRI scans to visualize the movement of CSF in the hippocampus, a part of the brain involved in forming new memories, among other tasks.

As we age, a certain level of cognitive decline is almost inevitable. There is a wide range of factors involved, and some scientists believe that the glymphatic system could play a role.

A study published in 2014 investigated the efficiency of mice’s glymphatic systems as they aged; the authors found a “dramatic decline in the efficiency.”

In a review of the glymphatic system and its role in disease and aging, the authors write that reduced activity in the system as we age might “contribute to the accumulation of misfolded and hyperphosphorylated proteins,” increasing the risk of neurodegenerative diseases and, perhaps, exacerbating cognitive dysfunction.

We still know comparatively little about the glymphatic system. However, because it cleanses our most sensitive and complex organ, it is likely to influence our overall health to some degree.

The glymphatic system might not contain the answers to all of our questions about neurodegenerative diseases and beyond, but it could hold the key to some interesting new perspectives.

“Marketers always ask me how to make more or better content and it’s almost always the wrong question. The right question is: How do I get my content in front of the right people.”

The True Benefits of Online Reviews.

An Opportunity With TOP Ebooks Library To Start Earning

Why You Should Trust TOP For All Reputation Management Needs.

4 Main Reasons To Do Online Reviewer Work With TOP.

4 Reasons To Go With TOP For Content Creation Services

3 Steps To Make Money Online With Writing For TOP.

One Main Reason To Go With TOP For Your Translation Platform.

Norway to allow dual citizenship from 2020.