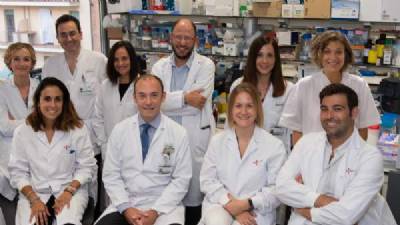 SCIENTISTS in Barcelona have found a tumour marker which predicts how cancer cells will respond to immunotherapy treatment – hailed as the future of oncology medication.

The report, published in Annals of Oncology and carried out by the Pi and Sunyer Institute of Biomedical Research (IDIBAPS) based at Barcelona’s Hospital Clínic, says the higher the amount of the protein PD1 found in white blood cells, the better the response is to pharmaceutical drugs designed to combat it.

Dr Aleix Prat, article coodinator and head of Medical Oncology at Hospital Clínic, says this is the ‘first-ever genomic tumour marker capable of predicting the benefits of immunotherapy, independently of the type of cancer involved’.

The next stage will be clinical trials.

“Results of our research show that 52% of patients with a high level of PD1 responded to anti-PD1 treatment, independently of the type of cancer they were suffering; however, responses in tumours with a low level of PD1 were just 15%,” Dr Prat explains.

Cancer is made up of an accumulation of genetic alterations that lead to tumour cells creating antigens, or proteins that can by identified by the immunobiology system – such as through white blood cells – and which dictate how well or otherwise a tumour will respond to medication.

Drugs targeting these proteins have been developed – such as Pembrolizumab and Nivolumab – which activate white blood cells inside a tumour.

White blood cells are responsible for the body’s immune system.

“For reasons which we are not yet aware of, the responses to immunotherapy differ greatly according to the type of cancer present,” the research report says.

“For this reason, it is necessary to identify tumour markers that can help predict response.”

To test their hypothesis, the research team analysed data from 547 genes, including PD1, in around 10,000 tumours and 34 types of cancer using The Cancer Genome Atlas (TCGA) database.

After finding that all these genes were associated with a greater probability of response to immunotherapy, the Barcelona scientists analysed 773 samples of 17 types of cancer from the IDIBAPS bio-bank.

“In this series of cases, we were able to confirm the same as we had seen in the TCGA, despite having used very different methods of analysis,” says researcher Dr Laia Paré.

With these results confirmed, the team developed a genome test to determine whether PD1 in white blood cells could be used as a tool in everyday clinical practice.

Their final phase was to test it in 117 tumours from patients treated with immunotherapy at Hospital Clínic and in other institutions forming part of the Spanish Melanoma Multidisciplinary Group.

The research was largely financed by a grant from the Spanish Medical Oncology Society (SEOM) and from funds amassed through donations to the charities Pas a Pas Contra el Càncer de Mama (‘Step by Step Against Breast Cancer’) and Save The Mama (‘Save the Breast’).

In the above photograph by Hospital Clínic, the IDIBAPS research team is shown in their laboratory.